Am I in a Flood Zone? Taking a Look at the Santa Clarita Zone Map

Published by Allegra on November 9, 2021 in category: Uncategorized 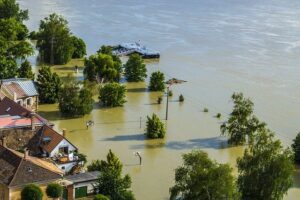 Located in northwestern LA County, California, Santa Clarita is a city with a population of 228,673. It is the 3rd largest city by population in LA County and the seventeenth-largest in California. The city spans over 70.75 square miles of land along the Santa Clara River.

The Santa Clarita city has a rich history, including stories of Indians, cowboys, oil booms, the gold rush, and a flooding disaster of epic proportion. In 1928, the city was the scene of the second-worst disaster in the history of California when the St. Francis Dam collapsed. This resulted in severe flooding killing at least 431 people.

At present, there are nearly 7,758 properties located in Santa Clarita. According to a LA County Climate Vulnerability study, Santa Clarita is highly exposed to severe climate impact, including hazards like extreme heat, inland flooding, extreme precipitation, and coastal flooding. The study reveals that as the sea rises by 2.5 feet at local shorelines, there is a moderate risk of flooding in the next 30 years. Nearly 26 percent of the properties are likely to be affected by flooding.

Apart from damaging properties, flooding also cuts off access to transportation, utilities, and emergency services; thereby, your daily routine comes to a standstill. Flooding may be caused by heavy precipitation too. No matter what the cause of flooding may be, it is essential to act fast. This is why residents and commercial properties owners in Santa Clarita rely on us. At 911 Restoration of Santa Clarita, we are experienced in commercial and home restoration after water damage. We have a team of seasoned home restoration experts who work in the best interest of clients. We come well-equipped with all necessary and industrial-grade equipment so that our team can get to work as soon as we arrive without any delay.

Our approach is to prevent further damage and restore your property to its livable condition. We do it all to your complete satisfaction from water mitigation to water removal, repairs, and restoration work. So, you can count on us when you need us the most knowing that our professional home restoration team will go above and beyond to get your property into its pre-damaged state.

Santa Clarita—Exploring the Reasons for the High Risk of Flooding

In the last decade, Los Angeles County has experienced record-breaking high temperatures. Unfortunately, things are expected to worsen in the coming decades. The county, which includes Santa Clarita, is exposed to the risk of high climate vulnerability. High climate vulnerability is defined as a combination of increased climate hazards with the negative impact of exposure and low adaptive capacity.

The study shows that in the coming years, there will be:

The patterns of rainfall will change with wetter winters and drier summers and springs. The rainfall concentration over short periods will increase. And do you know what does that means? It will increase the chances of inland flooding and, subsequently, the risk of mudslides and landslides. Though the increased risk can’t be calculated using the existing data, it is nonetheless believed that the damage from flooding in the coming years will be devastating if actions and prevention strategies are not implemented promptly.

It is crucial to understand that environmental changes mean higher seas, stronger storms, and new weather patterns. Hence, as the weather warms, there is more evaporation which means more water is available when it rains. Likewise, a warm atmosphere means warmer oceans. This can intensify flooding from offshore storms and hurricanes.

The Rise in Sea Level

Another reason for the high risk of Santa Clarita in the flood zone is the rising sea level. The rise in sea level increases coastal flood risk. This will not only result in more severe but more frequent coastal flooding too, especially in low-lying areas. Study shows that it will be challenging for low-income communities to cope with the damage caused by frequent flooding events if they don’t prepare beforehand. The damages are expected to be so severe that they may even outsize impact on the local economy.

Though California is focused on climate change mitigation and adaptation in its efforts, every property owner should take adequate measures to ensure they are prepared in case disaster strikes. One of the best ways to ensure this is to focus on home maintenance.